A French military Humanitarian Assistance Disaster Relief (HADR) joint exercise took place in Martinique and Guadeloupe from 17thto 26th April 2013. This exercise simulated the consequences of an earthquake of magnitude 7.9 occurring on 17th April 2013 at 07.00 AM whose epicenter was located near Pointe-à-Pître in Guadeloupe.

[The exercise CARAIBE 2013 is the major biennial exercise of the West Indies’ area, with more than 400 participants. Its main objective is to train the French Armed Forces of the West Indies (FAA) and the Martinique and Guadeloupe RSMA (RSMA-M and RSMA-G) to conduct a joint military maneuver focusing on logistics, within the framework of a Humanitarian Assistance Disaster Relief, and on an international basis (this year Netherlands, United Kingdom, and France as the Host Nation). This inter-allied exercise seeks to strengthen cooperation with the neighboring Caribbean Armed Forces and Polices Forces, in order to implement the concept of a commitment based on the aid to the population, in a region prone to natural disasters, like our Caribbean area.]

This exercise took place in the northern part of Guadeloupe (Grande-Terre) during a one week period with various activities, attempting to present all the different crises that could arise from an earthquake. The role played by the civilian administration remained important, but the main purpose of the exercise was to prepare the French Armed Forces (FAA) to react, in the best possible way, to any request for assistance. The event also took place in Fort-de-France, in Martinique, where the French Armed Forces Commanding Post is located. The exercise consisted of Observing Officers and High-Ranking officials from many neighboring countries. The Commissioner of Police of the Royal Saint-Lucia Police Force, Mr. Vernon FRANÇOIS honored the exercise by his presence, as well as his Deputy Commissioner Mr Errol ALEXANDER. The Commonwealth of Dominica was represented by Superintendent Cuffy Joseph WILLIAMS, Commander of the Police Special Service Unit. The Federation of Saint-Kitts and Nevis was represented by an observer, Captain Lynn WILKIN of the Marine Coast Guard, and by Lieutenant-Colonel Patrick WALLACE, as VIP, currently Chief of the entire Saint Kitts and Nevis Defense Force.

This was an occasion for the guests to meet with Admiral Georges BOSSELUT, Head of the French Armed Forces in the West Indies. The event was really appreciated by both guests and hosts, because of the frame of cooperation behind the exercise, including the majority of the countries in the region. The different situations presented allowed 13 guests representing 9 countries to be in a position to become more involved in the Decision-Making Process, which must be clear in the event of a natural disaster. Their participation allowed for the improvement of understanding among all the nations in the region, and allowed the French Forces to present their skills, once again, which could be implemented during a natural disaster, whether it on the French territory or in any other country in the Caribbean. 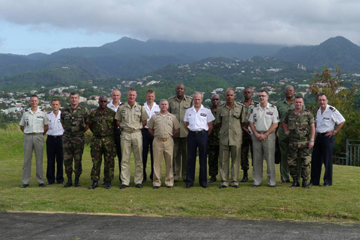 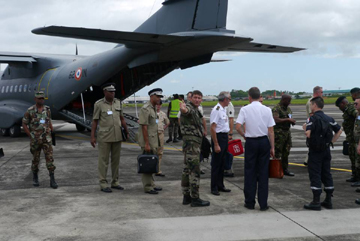 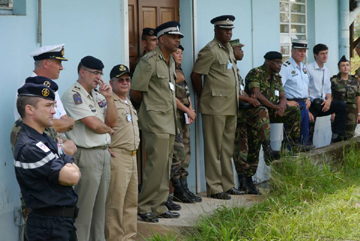