Beach Marathon of the "Dumont d’Urville" 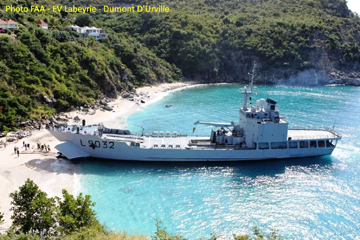 The vessel of the National marine, the “Dumont D’ Urville”, captained by Lieutenant Commander Luc Stutzmann, made a stopover at Port Roseau from 10th to 13th February 2012. On this occasion, Mr. Emmanuel MOURIEZ, First Counsellor at the Embassy et Herve de Solages, Defence Attaché, went to Dominica to participate in the event.

Several activities were organized during this stopover, in particular a press conference, where most local media houses were present, a lunch and a reception, in the presence of the President of Dominica Mr. Nicholas Joseph Liverpool, the Parliamentary Secretary in the Ministry of Foreign Affairs, Mr. Alvin Bernard, Permanent Secretary in the Ministry of National Security, Mr. Nicholas Bruno and the Commissioner of Police, Mr. Cyril Carette.

Monday, 13th February 2012, two members of the Coast Guard also boarded the vessel for a site visitof the Battalie, north of Roseau. On the beach, a welcoming committee made up of the local authorities, in the presence of local journalists and other residents, awaited the vessel to witness this no so common spectacle. Also in attendance were : Mr. Isaac, Chief of Disaster Management in Dominica, Mr. Carette, Commissioner of Police and Mr. David Andrews, Coast Guard Chief.

They all appreciated the special operation of the “Dumont d’ Urville” and the unloading of the vehicles on the beach which made it possible to officially validate the characteristics of the site of Battalie. 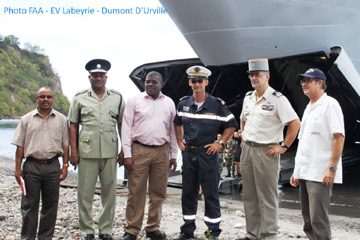