Hutchinson, Accor Lubrifiants, Chimirec and Vernet. You may not recognize their names, but these manufacturers make most of the parts of our vehicles. French automotive parts manufacturers are a potential growth sector, which the federation French Vehicle Equipment Industries (Fiev) intends to promote at the EQUIP AUTO show. They are a safe bet for the revival of French industry.

The EQUIP AUTO show, a global trade hub for automotive professionals, will take place in Villepinte, near Paris, on 16-20 October. Parts manufacturing is the largest sector of the automotive supply industry, accounting for €16.15 billion of a total turnover of €44 billion. This year, EQUIP AUTO will be attended by almost 1,800 exhibitors, presenting their latest innovations. All branches of the sector will be represented, from ignition and lighting to passenger compartment safety and comfort. The companies have an area of almost 120,000m2 at their disposal. This year, more than 125,000 visitors are expected, with 35% of them coming from abroad. The show is once again making innovation a priority by organizing the International Grands Prix for Automotive Innovation to celebrate emerging technologies. According to Claude Cham, the head of Fiev, “in the current climate of economic uncertainty and changing attitudes towards automotive products, our companies must continue to work unceasingly and harder than ever to offer innovative technologies, adapted to a diversified customer portfolio”. Three quarters of the exhibitors that will be received in the four exhibition halls in Villepinte represent foreign brands (from Italy, China, Germany, South Korea and India). This is hardly a coincidence, for France is home to a large number of subsidiaries of foreign groups, which make up 58% of the sector. There will nonetheless be no shortage of French exhibitors at the show. The Hutchinson Group, a global leader in rubber processing, is a particularly emblematic exhibitor. Founded in the 19th century by an American living in France, the company invests around €162 million annually in research and development in order to design cutting-edge technologies. Meanwhile, Solaufil, a company that specializes in filtering, considers EQUIP AUTO to be “a crucial showcase enabling companies to engage with French and international customers”.

As well as parts manufacturers, EQUIP AUTO also welcomes large franchisers such as Midas, Speedy and Norauto (see Actualité en France N°…). Actia Muller, a leader in technical inspection, will use this year’s show as an opportunity to present Actia Vision, a preventive maintenance tool. “EQUIP AUTO is a real challenge for our group; it is our 13th month, in financial terms,” explains the group’s CEO, David Vayssié. “It is also a chance to invite our international distributors and improve our product promotion.” 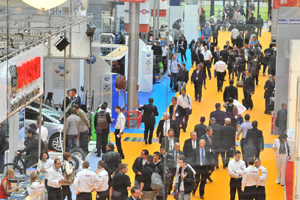 Fiev is relying heavily on international development to boost the industry’s growth. The automotive parts sector has benefited from the significant increase in global automobile production, which rose to an unprecedented level in 2012. As a result, the sector’s exports to Brazil, for example, jumped by 9% and those to China by 4%.

Moreover, the market’s largest stakeholders continue to open branches abroad. Since 2006, Fiev has organized an automotive parts trade fair in Algeria. The next will be held in March 2014 in Algiers, with around 250 exhibitors and 8,000 expected visitors.

Automotive parts manufacturers in France allocate between 5% and 6% of their turnover to research and development. The three main French groups in the sector (Valeo, Faurecia and Plastic Omnium) applied for around 1,200 patents in 2012. Groups in France therefore very often remain market leaders for both low-end and high-end products. These remarkable performances mean that France boasts a trade surplus of €1.74 billion for the automotive parts sector.